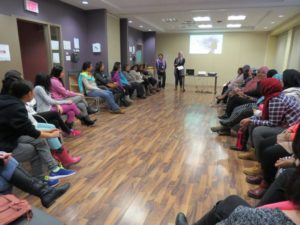 Empower’em President and Founder, Nayaelah Siddiqui, understands there is a growing lack of self-confidence in Muslim women, which needs to be addressed.

According to the Environics Survey of Muslims in Canada (2016), one of the top issues facing Canadian Muslims is how they are perceived by the larger, mainstream society. One-third (33%) of non-Muslim Canadians have a generally negative view of Islam. Moreover, Statistics Canada has noted that hate crimes against Canadian Muslims have doubled over the last three years. Muslim women, particularly those who are visibly Muslim due to the distinguished “hijab” or headscarf they wear, are the most frequent targets of hateful demonstrations that are manifested in numerous ways, including exclusion from mainstream society.

In the absence of strong support networks, these issues may lead to a lack of self-confidence, identity, and Canadian pride if they are left unaddressed; further discouraging young women from fully thriving in their communities and hindering their ability to contribute in positive ways to enrich Canadian society.

This is why JustChange is proud to support Empowerem’s main objective of boosting self-confidence in women by empowering them in four key areas of development.

These four objectives help with empowering young women better enabling them to become more informed, engaged and civically active so that they can become positive forces in their communities, in Ottawa, and by extension the wider Canadian society. For example, through Skills Development, Empower’em provides workshops on car management (like how to  change a tire or boost a car). Another example via the Outreach objective, they aim to start “Quilt for them.” This initiative will not only involve young women learning skills (e.g., sewing), but also paved a way for them to have a positive impact in the communities they live in. Women can start projects that they are most passionate about with like-minded people which would lead to a stronger and more collective effort in community projects.

You can learn more about Empower’em at their website here: http://empowerem.ca/ and join us for #JustDrinks on December 15th 2016 at 6:30pm at the Ministry of Coffee and Social Affairs at 1013 Wellington St W, Ottawa, ON K1Y 2Y1 to celebrate this incredible Ottawa-based initiative.

You can reserve your free ticket here.